Need wedding anniversary party ideas? Then you have come to the right place! Whether it is a small intimate family dinner or a great big party you will want it to be just right.

We have put together the best ideas to help you plan a fabulous anniversary celebration, plus real-life anniversary parties too.

Each Anniversary has a symbol and these are great to use as the theme for your party.

Below you will find party ideas for decorations, invitations and themes by year. 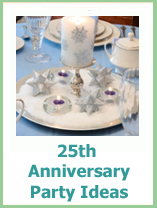 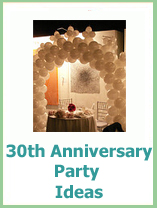 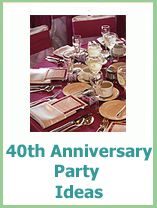 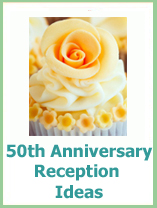 And we also have Free Anniversary Speech ideas here, that you can print and customize for you.

When it comes to planning your Anniversary Party being organized is the key to success and taking everything step-by-step.

And don't forget you could enjoy your Anniversary at home just the two of you.

When it comes to organizing an Anniversary Party a lot of people get hung up on what they think is the right thing to do.

The thing to remember is that the only right thing to do is what feels right for the two of you.

Below we have answered the questions we often get asked.

What Do You Do At An Anniversary Party?

There really are no rules when it comes to celebrating your Anniversary.

What Years Should You Have An Anniversary Party?

There are no years you should have an Anniversary Party, a lot of couples choose to have a party on big milestone Anniversaries.

But you could choose to have your Anniversary Party on your 1st year or decide after a difficult year you want to celebrate.

Again, there are no rules when it comes to your Anniversary celebrations.

Is It OK to Throw Your Own Anniversary Party?

Yes! It is very OK to throw your own Anniversary Party, if for no other reason than you will get exactly what you would like.

Have we mentioned before that there are no rules when it comes to your Anniversary celebrations?

How Do You Throw An Anniversary Party on a Budget?

Having an Anniversary Party on a budget is all about being organized, set your budget and stick to it.

Our Free printable party checklist is a good place to start so you can see the areas that you may want to think about.

The cheapest place to have a party is one that you don't have to pay for, so have a think about whether you would like everyone to come to your home or if you can find a local park or beach that would be good.

The next biggest expense when it comes to a party is the food. You can save money by having a Pot Luck Party where everyone brings a dish. Or you could have a BBQ or an Afternoon Tea party where no expects lots of food.

Decorations can be simple but still look good. Your photographs from over the years are a great starting point and Anniversary Balloons and Decorations from Amazon are relatively inexpensive.

Your Anniversary invitations can be sent out by email, text or WhatsApp all of which are free to use. You could even set up a facebook event.