10 year Anniversary party ideas come in all sorts of colors and themes, this is the first big milestone anniversary which makes it a special occasion and one that is worth celebrating in style!

After 10 years of marriage you will have lots of close friends that will want to celebrate your 10th Anniversary and holding a party is a wonderful way to share your special day with them. However, it does make your guest list nice and big too so whether you are planning your own anniversary party or you are organizing a surprise party you will want to be organized.

Starting with the traditional anniversary theme and you have tin, maybe not the most glamorous of items but there are lots of fun ways to incorporate it into your theme.

Meaning of the 10th Anniversary Symbol

Choosing the theme of your party will set the tone of you party. 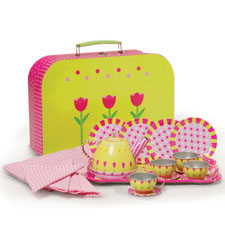 You could go vintage and have an afternoon tea party complete with pretty vintage tin plates filled with gorgeous cakes and pastel colors everywhere.

Think village fete when you go with this idea. You can have cute sandwiches and cake stands filled with yummy goodies, plus pots of tea and big jugs of homemade lemonade. You don't need to have many decorations as all of the cakes will be decoration enough and if the weather is kind to you on your 10th anniversary then this is the perfect time for a garden party.

If your own back yard is not big enough for all of your guests then you could look at having your anniversary at your local park, you may need to let the local park wardens know that you are holding a party so that they can reserve an area for you.

Or you could go super sparkly and have a Diamond themed Anniversary party with lots of sparkly gems everywhere. This will be easier if you choose a venue with fabulous chandeliers or looks sparkly with mirrors. 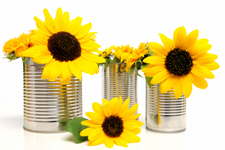 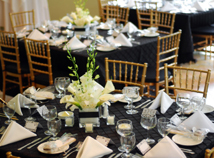 Romantic Ideas For Your Party

Celebrate the two of you and your successful marriage with lots of favorite photos of the two of you everywhere. It can be ones from when you were dating or your Wedding Day that others may not have seen.

You could also re-do your wedding song with all of your best moves or take this as as an opportunity to have the songs played that you love now.

Also, remember to take time for just the two of you. If you think back to your wedding day and how quickly the day went just try and grab a moment to take it all in.

Just remember you don't have to have a 10th Anniversary party you may prefer to go on a much-needed vacation, a cruise, a boat ride or a road trip, maybe take a trip down memory lane and plan a long weekend just the two of you with lots of romantic dates.