60th wedding anniversary party ideas need to be special, 60 years together is a big celebration!

Start by thinking about the type of party your anniversary couple will enjoy;

Now you know the type of party your anniversary couple will enjoy you need to start thinking about the 60th anniversary celebrations.

You will also need to think about who you are going to invite as the number of guests will play a big part in choosing your venue, or you could choose the venue first and then know how many people you can invite.

Either way don't forget about invitations!

Location is important too as you want to be able to be able to spend as much time as possible enjoying everyone's company. We have always found that family parties always work best if you are at someone's home.

Even better if it's in the summer months as you can then be outdoors too which means you have more space to invite more people. Love garden parties! 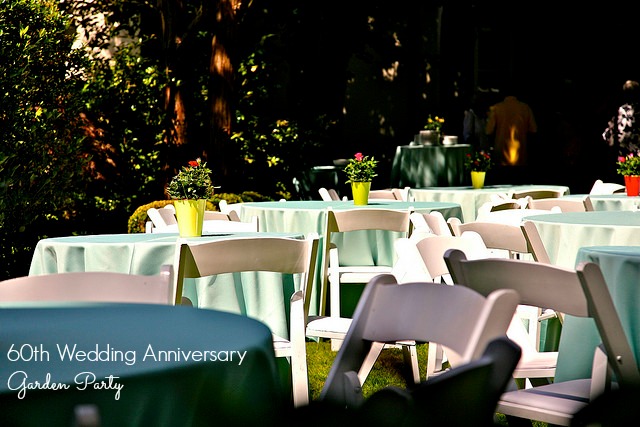 Alternatively you could look at having a picnic at your local State park or there may be a room or space that you can hire at your local park that would be perfect.

If you are organizing the party and still want to enjoy the day it would be best to rent a space and have caterers. That way you will be able to chat to everyone and not have to worry if there is enough food etc.

Most 60th wedding annversary party ideas will have either the diamond theme as this is the symbol of 60 years together or a 1960s theme.

For your party decorations use the diamond theme with white and sparkly everything.

Thankfully it has become much easier to find 60th anniversary specific party items and you may also want to use decorations that have the number 60 on.

Decoration ideas for your party;

It is definitely worth checking out the 60th Anniversary Decorations that are available on Amazon. 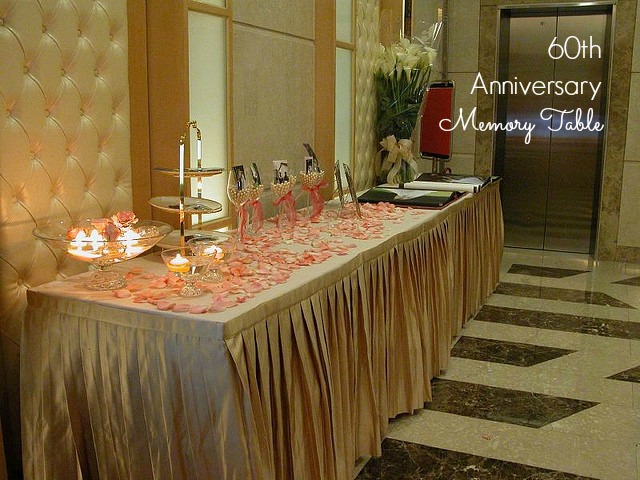 It is also nice to have photographs from the last 60 years, a display of wedding photographs would be perfect. You may want to copy the originals so you don't need to worry if they get damaged.

You can add these to a memory table, along with souvenirs from the past 60 years, some ideas;

Your anniversary party is all about the couple and being able to spend time with family and friends, hope you get to enjoy the party too!

Playing games at an Anniversary Party helps get a party started and depending how competitive the guests are they also help to keep the party going.

Ice-Breaker type games are a good way to get everyone talking to each other and this can be a quiz where you have tables competing against each other. Your quiz theme could be the last sixty years so having teams that have a good mixture of ages is perfect.

The quiz questions can be about everyday events but theme them to the Anniversary;

You can also include quiz questions about the couple

We are sure you can come up with lots of your own or check out more ideas here.

You could also have posters around the room with maps and ask your guests to pinpoint the exact location of where they met, were married and lived over the last sixty years. It is the Anniversary version of pin the tail on the donkey! Although we are not thinking you should play this game blind-folded!

If your Anniversary couple love a particular game then why not have a competition at the party. Card games are always good fun or a themed corn-hole game would definitely get everyone talking.

If you are having a party at home you could have lots of outdoor games set up so everyone young and old can join in when they want to. You could even have your very own fair in your backyard.