Anniversary Gift By Years
The History Behind The Traditional Anniversary List

Knowing what the anniversary gift by years helps when you are searching for the perfect present for your anniversary couple.

It is believed that the custom began hundreds of years ago in Central Europe when husbands would present garlands of silver on a 25th anniversary and a garland of gold on a 50th anniversary. This was probably to do more with superstition than finding a great gift and really how many couples do you think would have lived long enough in the middle ages to celebrate their 50th?

There is no mention about gifts for anniversaries by the history experts I have read until the Victorian age and they loved to collect things and find meaning behind everything!

Then in 1922 Emily Post wrote her first etiquette book titled "Etiquette in Society, in Business, in Politics, and at Home" she included a guide to wedding anniversary gifts for the 1st, 5th, 10th, 15th, 20th, 25th and 50th years of marriage and the rest is history!

Now we also have the modern anniversary list which can help when you are needing more choice, it was started by the American National Retail Jewelry Association in 1937, so there is a lot of gems on the list! Today that would be like Apple starting a list with iphones, ipads and hi-tech kit! However in the innocence of the 1930s this list still has a lot of charm and lots of bling too!

We have put both the modern and traditional lists together for you to decide for yourselves which you prefer.

It's interesting that the traditional anniversary list stops a gift for each year after the 15th anniversary and then moves onto an anniversary gift every 5 years on the main anniversaries. If you celebrate your anniversaries you still want to have the fun of trying to find a gift that your partner would love, so swapping over to the modern list for the years in between makes a lot of sense! 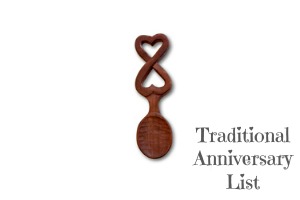 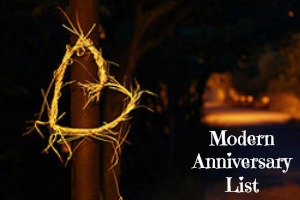 Of course there is not just the modern and traditional anniversary lists, you also have the color and flower anniversary list and a gemstone list. Both of these add some interesting gift ideas to your gift buying.