Sensual Chrysoprase For Your 18th Anniversary 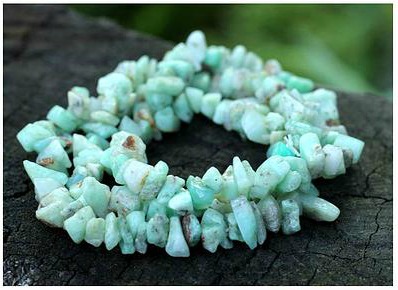 Gorgeous Chrysoprase, the anniversary stone of 18 years and deep in color, from apple green to a deep dark green, this is a very popular gemstone. The intensity of the color is due to the levels of nickel in the gem.

Known as the stone of Venus, which according to astronomers is the planet that rules sex, sensuality, love and marriage. It seems rather an apt stone for celebrating your wedding anniversary.

It is also believed to symbolize happiness – which really is fundamental in all relationships.

Chrysoprase has been popular for hundreds of years – Egyptians, Romans and Greeks all used the stone and it was really one of the stones of the Art Deco period, where they copied the designs of the Ancient Egyptians after the discovery of Tutankhamun’s tomb.

Alexandra the Great was also believed to wear a girdle decorated with the stone, not that we are saying you should be gifting a girdle for your anniversary. It just sounds painful!

Instead there are a number of gorgeous pieces of jewelry to choose from, we are pretty sure one of these anniversary gifts would be more stylish.

Your 18th anniversary is celebrated on the modern list with porcelain.

If you prefer to get away from it all on your anniversary why not use the origins of Chrysoprase as your destination?

You could choose from ; Queensland, Australia for the finest gems where it is known as Australian Jade, or Brazil, Germany, India, Kazakhstan, Madagascar, Russia, South Africa, Tanzania, United States, Zimbabwe.

These almost stretches the entire globe, so you have quite a choice for vacation spots.