Your 5th anniversary is traditionally celebrated with wood and on the modern list with silverware.

If you are looking for a romantic and pretty gift take a look at the gemstone anniversary list where you celebrate 5 years of marriage with Rose Quartz.

What Is The 5th Anniversary Gift Meaning?

The pink quartz has also been a favorite among many kings and queens,

The main countries that mine the mineral now are the United States, India, Brazil, Africa, Australia, Canada, England, Germany, Madagascar and Scotland. It is the State mineral of South Dakota.

You could plan some great anniversary vacations in these countries and have fun finding your own Rose Quartz! 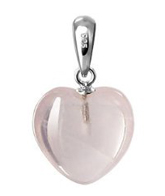 So Rose quartz is a great stone to have as a gift and even more perfect if it is your 5 year wedding anniversary gift! Who wouldn't want a gift that is the stone of love and as an added benefit makes you look younger too? Count me in!

As Rose Quartz is considered to be the stone of unconditional love and have healing properties it is a great gift to give the love of your life, and there are lots of gifts to choose from, here are some of our favorites for an anniversary gift.

and also at Amazon.com