What is An Eternity Ring?

Finding out what an eternity ring is and why it makes such a great Anniversary Gift will make you wonder why you haven't bought one before.

Or it will make you want one even more!

The Eternity Ring is a never ending circle that represents the Circle of Life and also Never Ending Love.

It is a symbol that goes back as far as the Ancient Greeks and Ancient Egyptians where they gifted an Ouroboros ring which is a snake or dragon eating it's own tail - again a continuous circle and representing how we are all connected. 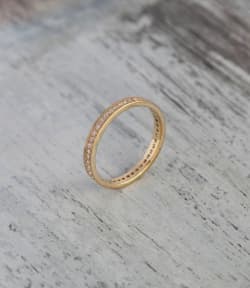 The Eternity Ring has come to symbolize the strength of a marriage and how your love is never ending.

It is a beautiful Anniversary gift to someone you love and is often given at a significant Anniversary.

You can also look at the Anniversary Gemstone list and choose the gemstone that represents this Anniversary year.

Quite often an Eternity Ring is given after the birth of your first child.

The alternative is to choose a ring that has the stones on the front facing part of the ring.

When you are choosing your eternity ring have a think about which finger you would like to wear it on, traditionally the ring is worn on your ring finger above your Wedding Band and Engagement ring. You will want to make sure that the design you choose fits with your other rings.