Onyx is a deep and powerful gemstone, perfect for your 7th anniversary.

That alone would be reason enough to gift such a gorgeous stone but it is also truly stunning.

Onyx has been used for centuries and was very popular with the Greeks, Egyptians and Romans.

The legend and name behind Onyx involves Cupid and Venus – the gods of desire and love.

Onyx means nail or claw and the legend is that Cupid cut Venus’ toenails while she was sleeping. He scattered the clippings onto the ground and the fates turned them into stone so that no part of Venus would perish.

If you love vintage jewelry, Onyx due to its dark color is a true star. Popular in Victorian and Art Deco pieces you will find a perfect gift. 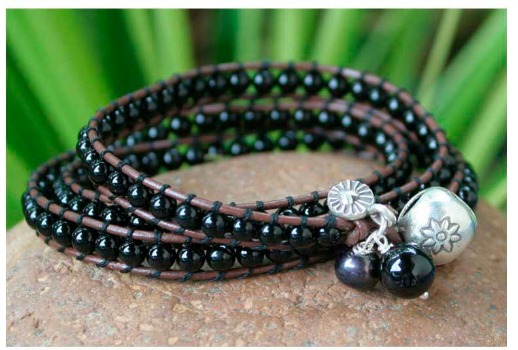 Beautiful and modern pieces of Onyx jewelry from Novica.

And lots of gorgeous Onyx Anniversary Gifts at Amazon