Your 4th anniversary is traditionally celebrated with silk or linen and on the modern list with flowers. But if you want something with a bit more sparkle then you need to look at the gemstone anniversary list.

On this list your 4th anniversary is blue topaz and this truly is a beautiful stone to celebrate with, as it is the stone of true love and success in all you do. I think we will all have a bucket full then! ;o)

Blue Topaz is symbolic of love and fidelity. Plus the Ancient Greeks believed it increased your strength and the Romans believed it helped your eyesight.

So Topaz is quite an amazing gemstone and for a gift it is beautiful. The natural blue of this stone is quite rare and the stones are often treated with heat to increase the color blue.

Where can you find Blue Topaz? 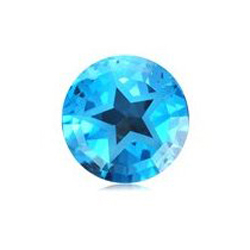 Texas is a good place to find natural blue topaz and today it is the Texas State stone. If you are living in Texas and it is your 4th anniversary you couldn't get a better gift. The Texans even have their own special way of cutting the stone which is a star shape. It is called the official lone star gemstone cut, which you can see in the example from Amazon

There are lots of gorgeous handcrafted Blue Topaz gifts at novica.com

Another way to include this stone as part of your 4th anniversary gift is to use it as an excuse to travel and maybe even find your own gemstone. It is found in a number of places around the world in small quantities:

Most of these places are fantastic, romantic vacation destinations, others are sadly still in the middle of war, hopefully one day they will all be great places to visit.